Show article as a PDF

Lufthansa group invests a further 3 billion euro in its fleet

Investing in a fleet of aircraft that is as fuel-efficient as possible is the best form of climate protection. To this effect, the Lufthansa Group ordered 27 Airbus A320neo and A321neo aircraft at the end of September. Thanks to their efficient engines and aerodynamic wing tips, the short- and medium-haul aircraft will save up to 20 percent kerosene per seat kilometer. According to the list prices, the investment costs total around 3 billion euros. All in all, the Lufthansa Group has ordered 149 „Neos“, 13 of which are already flying for Lufthansa. 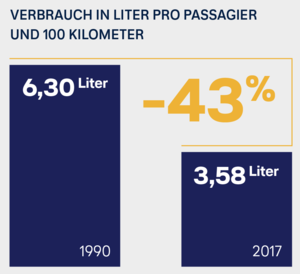 Recent figures from the German Aviation Association (BDL) underline that the company is taking the right course. German airlines consumed only 3.58 liters of kerosene per passenger and 100 kilometers in 2017, thus setting a new efficiency record. By comparison, in 1990, the value was 6.3 liters, and consumption has fallen by 43 percent since then – especially because of extensive fleet renewals.

The Lufthansa Group seeks to maintain continuous communication with its stakeholders. On 15 October 2018, the Group will once again launch an online stakeholder survey on key sustainability issues. We would like to invite you to take part in this survey.

Your assessments will help us to focus on our commitment to upholding sustainable and responsible business practices. As of 15 October, this link will take you to the survey, which will take you about ten minutes to complete.

Women in the cockpit

More than 10,000 pilots work in the cockpits of the Lufthansa Group. Only about 6 percent of them are women. This figure clearly contradicts the company-wide goal of achieving a fair share of women in management positions. After all, already 15 percent of the candidates in the current courses of the European Flight Academy, which trains pilots for the Lufthansa Group, are female. And Lufthansa Aviation Training is actively seeking additional female applicants – with, for example, a focus campaign for women, which is soon to be initiated.

August 1988
Nicola Lunemann and Evi Lausmann are the first two female pilots to take off for Lufthansa.

158 young people have recently started their apprenticeship or a dual course of study at Lufthansa Technik. At the same time, the selection for the coming year is already up and running. The goals are ambitious: Starting in 2019, Lufthansa Technik will almost double the number of apprenticeships offered directly in Hamburg and Frankfurt. The subsidiaries will also increase their commitment further – Lufthansa Technik AERO Alzey in particular wants to again enable significantly more young people to start their careers.

In the annual Climate Protection Report, the Association of the German Air Transport Industry (BDL) presents the key indicators for improving energy efficiency and climate protection in aviation. The current report was published on 1 October.

Open report (only available in German)

In the climate protection portal, the aviation industry offers comprehensive information and key figures on strategies and measures to reduce aviation emissions.

Show article as a PDF